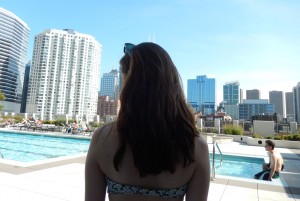 It was time to get serious. A whole month of playing tourist and model housewife was more than enough for this French girl.

Naturally, in France, I was used to five weeks of vacation a year, which I took even when I wasmy own boss, but my quota of down time was filled. I had a work permit in the United States, and I wanted nothing more than to join the legion of successful businesswomen I so admired.

My idea of success, though, was tempered by my French self-effacement. Any positive notion I had of my work in France came out sounding negative, or indifferent at best. And yet I had managed, by sheer dint of will, to build a very profitable and fulfilling business back home.

And now I wanted to achieve the American Dream. I wanted to be a productive citizen of the United States and contribute to its economy.

Joshua made me very happy. But now that I was ready to conquer Chicago, I had to remind him that the city was first discovered by two Frenchmen. What did this have to do with my plans? Not much, but a little chauvinism couldn’t hurt anybody.

I had announced my plans to Joshua over the weekend, and he was delighted with the news. We had started brainstorming next steps together, even though I knew exactly what I needed to do to launch my personal shopper business here. But it was just so thrilling to see how excited he was. And what was even more thrilling is that in a few more weeks, I would become Mrs. Joshua Canhill.

The most perplexing reaction to my big news came from Tim at the French Market. He leaned back in his chair, adjusted his tie, and proclaimed “It’s about time!” I didn’t know what to say.

Translated from french by Kenneth Barger 🙂